A journey from London to Canterbury 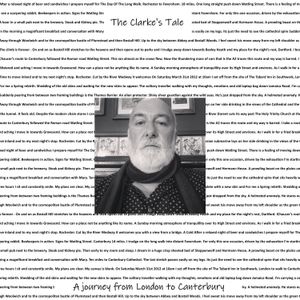 On Saturday March 31st 2012 at 10am I set off from the site of The Tabard Inn in Southwark, London to walk to Canterbury in Kent. I intend to follow, as closely as possible, the route the Chaucerian pilgrims took on their journey to Canterbury cathedral at the end of the 14th century.

For me a Spring rebirth. Shedding of the old skins and waiting for the new skins to appear. The solitary traveller walking with my thoughts, emotions and old laptop bag down Jamaica Road. I’m carrying a copy of the Richard Wilhelm edition of the I Ching, ‘The Diceman’ by Luke Rhinehart, printed Google maps of the various stages of the journey, two T shirts, three sets of underwear and a field recorder. I ask the way and directions are given by bus numbers. I’m realising that walking doesn’t appear to be be what happens now. Is this based on not having to walk anymore? Or is it something deeper? Alone and unknown as I stride towards Greenwich I let my mind wander to all those who walked before me. Those alone with the rhythm of their own steps. 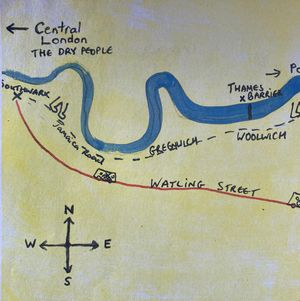 Suddenly peering from between two framing buildings is the Thames Barrier. An alien protector. Shiny silver guardian against the wild seas. He’s just dropped from the sky. A helmeted anomaly. He stares out down the Thames daring any invader to come close. I stand and look at his huge presence and he is aware of nothing but his purpose. His focus is immense. Blinkered down the river waiting for his moment to arrive. The destruction of tides at his beck and call.

Away through Woolwich and to the cosmopolitan bustle of Plumstead and then Bostall Hill. Up to the sky between Abbey and Bostall Woods. I feel sweet Isis move away from my left shoulder as the green takes hold. I talk to the hill as I slowly climb. The conversation is of tired limbs and the wonder of the sudden change to woodland. I ask her how long she’s been there and how the change from concrete to wood can be so sudden? Her answer is that it doesn’t really matter. And that’s something that I start to realise after not even one day of walking. It doesn’t matter. The hill is the hill. The Thames is the Thames. The sky is the sky and that’s that. 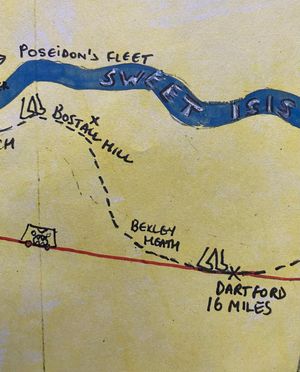 The climb is forever . On and on as Bostall Hill stretches to the heavens and then opens out to parks and I trudge away down towards Bexley Heath and my place for the night’s rest, Dartford. I book into the Royal Victoria and Bull and feast in a local Indian restaurant. Dartford welcomes the walker in, funnelled down to a high street that has little to do with the bridge and the tunnel. It feels old. Despite the modern chain stores I can image Chaucer and his pilgrims being here. The way the land lies and the River Darent cuts its way past The Holy Trinity Church at the end of the High Street. There is longevity here. Dartford’s not just a bridge and a tunnel.

Chaucer’s route to Canterbury followed the Roman road Watling Street. This ran almost as the crows flew. Now the thundering mass of cars that is the A2 traces this route and my way is barred. I take a route parallel north and cross over the M25 early on Sunday morning heading to Greenhithe and Swanscombe. The streets are deserted as sweet Isis appears over my left shoulder once again. Suddenly I’m in between the strangest of pairs. An army of pondreeds and Ebsfleet International. The craning reeds and the vast expanse of an International Rail terminal. I stand and watch them from a distance. Everything’s alright with Ebsfleet and the pondreeds . They’re really just the same. Two players in a very different game. An empathic union of opposites. Reeds and rail terminal. They sit with passing aether between them. Concrete and green. Organised and free. Together they create a sunchild. Me. I stand between them. A product of the union. They look over. Two discerning parents guiding me on my way. 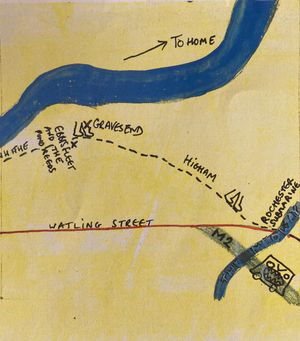 Blistered and aching I move in towards Gravesend. How can a place not be anything like its name. A Sunday morning atmosphere of tranquillity over its High Street and environs. As I walk in for a fried breakfast and coffee, a huge container ship slides past in the distance like a forgotten dinosaur. Its motion out of sorts with the land. Its lazy,languid progress makes everything start to slow down. I eat the breakfast in a daze contemplating the movement of traffic up and down the river; the centuries of trade and invasions. I sense Gravesend as a willing spectator. A witness to whatever the river decides. The town nestles in tight to its side and watches.

Time to move inland and to my next night’s stop. Rochester. Cut by the River Medway it welcomes you with a view from a bridge. A Cold War Russian submarine lays on her side drinking in the views of the Cathedral and the town centre. Rochester submarine arrived there in the 1990’s from Folkestone ready for museum duty perhaps. But it was not to be. She lays alone and cold now with just memories and distant war cries echoing through her empty hull. 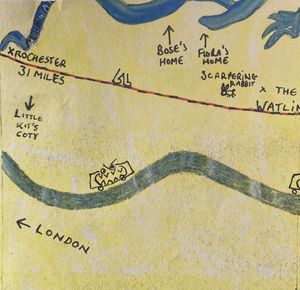 After a relaxed night of beer and sandwiches I prepare myself for The Day Of The Long Walk. Rochester to Faversham. 18 miles. One long straight push down Watling Street. There is a feeling of moving downhill towards Canterbury. An inevitability but also very tired legs and a mind that is wandering unfettered through space and time. I visit my dead mother. My daughter and girlfriend. I contemplate my working life and I allow clarity to appear. The rhythm of my walking and the toing and froing of the traffic creates an emptiness of peace. I vow to do this type of trip regularly. I need it.

I see a scarpering rabbit. Beekeepers in action. Signs for Watling Street. Canterbury 14 miles. I trudge on the long walk into distant Faversham. For only this one occasion, driven by the exhaustion I’m starting to feel, I’ve pre-booked accommodation. Gladstone House. Mary the hostess supreme. She knows about my walk from the phone call booking and a hot bath of Epsom salts and foam is awaiting me. Comforts galore with plants and Buddhas scattered around a magnificent Town House just outside the town centre.

A beer in a small pub next to the brewery. Steak and Kidney pie. Then early to my room and sleep. I dream in a huge crisp sheeted bed of Steppenwolf and Hermann Hesse. A prowling beast on the plains unable to connect with the world as it is. Unable to be with its kind. 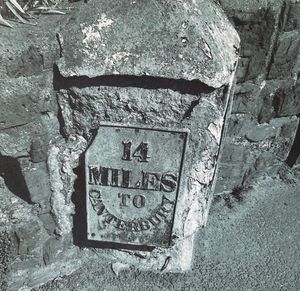 In the morning a magnificent breakfast and conversation with Mary. Ten miles to Canterbury Cathedral. The last stretch passes easily on my legs. Its just the need to see the cathedral spire that sits heavily with me. Where are you? Why are you taking so long to appear? Suddenly on a dual carriageway falling in towards the city centre I see it. On the horizon pointing to the sky. I wind it towards it. I feel my heart singing out. I actually feel a rush to my face and fingers of warm. “You’ve done it! You’ve done it! You’ve done it!” My voice is manifest in Canterbury. Physically I shout. I am my father, my mother, my teacher all. I love myself for once. At the foot of the cathedral I blow the spire a kiss and head for home. The crowds all unaware of what the solitary traveller has done. The whole journey from London to Canterbury took me three days. The train ride back to my home takes me three hours. 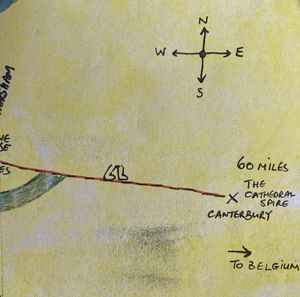 In those three hours I sit and constantly smile. My plans are clear. My canvas is blank. The solitary traveller returns to his friends and family complete with a new skin and a fresh life. Chaucer would have been proud of me.